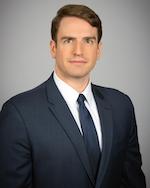 Stephen Shaver is an associate attorney at Wachler & Associates, P.C. Stephen represents healthcare providers and suppliers in the defense of Medicare, Medicaid, and third-party payor audits, as well as a broad range of health professional and facility licensing and regulatory compliance matters.

Stephen graduated from the Washington University in St. Louis School of Law. During law school, Stephen was named to the Dean’s List on multiple occasions. He also competed in the Wiley Rutledge Moot Court Competition and served as a staff editor for the Washington University Journal of Law and Policy. Stephen earned a CALI award for the top performance in the school’s Prosecution Clinic and interned at several government agencies, including the United States Attorney’s Office for the District of Columbia in Washington, D.C. Prior to law school, Stephen earned his Bachelor of Arts in History from the University of Notre Dame.

Stephen began his career as a Deputy County Attorney in Phoenix, Arizona, where he prosecuted violent and gang-related crime. Prior to joining Wachler & Associates, Stephen served in the Homicide Unit of the Wayne County Prosecutor’s Office. His experience includes handling high-profile prosecutions and serving as first chair trial counsel in over a dozen jury trials, substantially all of which resulted in convictions.